Cancer Countermeasures on a Column 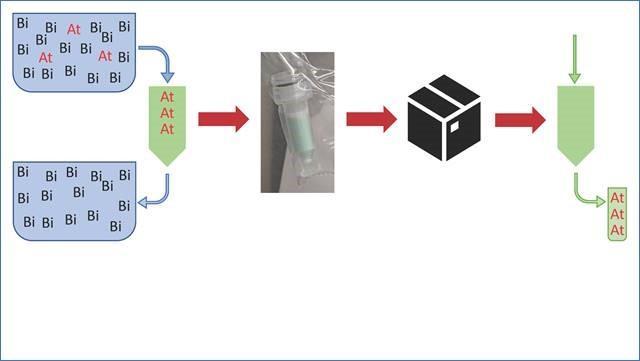 Image courtesy of Texas A&M University The medical radioisotope astatine is separated from bismuth then loaded into a resin column. Once dry, the column is packed for shipping so the astatine can be sent for use at a cancer treatment center.

Researchers supported by the DOE Isotope Program are studying the isotope astatine-211 (At-211) for a new cancer treatment called targeted alpha therapy. This type of treatment may do more damage to cancer cells and cause less harm to the rest of the body than current cancer therapies because it emits alpha particles. Alpha particles deposit a large amount of energy in a small volume of tissue. Researchers have now developed a novel method of separating and shipping At-211. The method separates radioactive At-211 from nonradioactive bismuth, where At-211 is present at the level of 1 in 35,000,000 atoms. The At-211 is then loaded into a column made of resin for delivery to a cancer center.