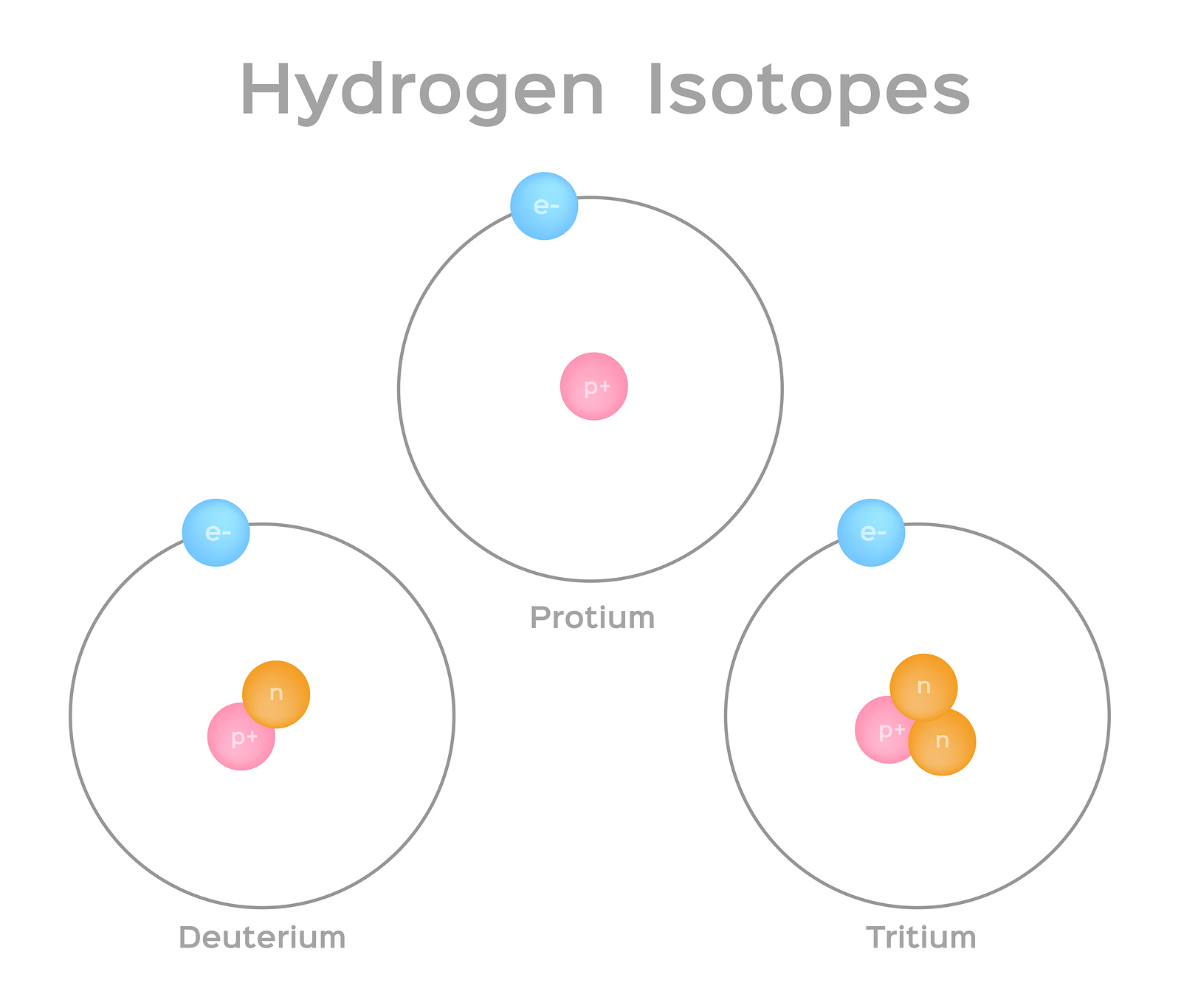 Atoms are composed of a cloud of electrons surrounding a dense nucleus that is 100,000 times smaller and comprised of protons and neutrons. The number of protons(i.e., atomic number, "Z") determines the element; for example, a strontium nucleus always has 38 protons, and a rubidium nucleus always has 37. There is an equal number of electrons surrounding the nucleus to keep the atom electrically neutral, and these electrons determine the chemical properties of the element—enabling molecules like strontium chloride, SrCl2, to form bonds from individual strontium and chlorine atoms.

Isotopes are atoms of the same element that have the same number of protons (i.e., atomic number, "Z") but a different number of neutrons, meaning that their mass number, "A", varies. Take hydrogen, for example. It has three naturally occurring isotopes--1H, 2H, and 3H. Hydrogen-1, or protium, is the most prevalent hydrogen isotope, accounting for 99.98% hydrogen atoms, and has no neutrons. Hydrogen-2 and Hydrogen-3 have one and two neutrons, respectively, and are often man-made. Hydrogen has four additional isotopes (4H through 7H) that are manmade and highly unstable.

Another example of an element with numerous isotopes is strontium. While most (82.58%) strontium atoms have 50 neutrons, others have anywhere from 44 to 52 neutrons, yet they are still strontium because they have 38 protons.

Isotopes are notated in multiple ways. Most commonly, they are specified by the name or symbol of the particular element, immediately following by a hyphen and the mass number (e.g., carbon-14 or C-14). Isotopes can also be defined in standard, or "AZE", notation where A is the mass number, Z is the atomic number, and E is the element symbol. The mass number "A" is indicated with a superscript to the left of the chemical symbol "E" while the atomic number "Z" is indicated with a subscript.

However, since the atomic number "Z" can always be determined by the chemical symbol, it is common practice to only state the mass number (e.g., 14C) and pronounce it as "carbon fourteen." If the letter "m" immediately follows the mass number (e.g., technetium-99m), it indicates a metastable state of the atomic nucleus (i.e., a stable state other than the isotope's lowest-energy ground state).

Isotopes of the same element have nearly identical chemical and physical properties, but their nuclear properties vary, making some invaluable for mankind, while others have no practical value (at least, for the time being). Some are referred to as “stable”, meaning their nuclear makeup does not change with time. Most naturally occurring isotopes are stable. An isotope is "radioactive" if its nucleus has a probability of spontaneously changing (i.e., radioactively decaying) over time. During radioactive decay, a "parent" isotope transforms into a "daughter" isotope (possibly of a different element). Often, a sequence of daughter decays called a "decay chain" must complete before a stable nucleus is achieved. The rate at which a radioisotope decays is measured by the atom's half-life (tH), which represents the time it takes for half of the material to decay. Each radioisotope has a definite half-life, ranging from a fraction of a second (e.g., 215At at 0.1 milliseconds) to billions of years (e.g.,238U at 4.468 billion years).

Elements can have both stable and radioactive isotopes. Strontium, for example, has four stable isotopes: Sr-84, Sr-86, Sr-87, and Sr-88; and one radioactive isotope, Sr-82. Over time, Sr-82 decays to rubidium-82 with a half-life of 25 days, making it suitable for use in generators to provide rubidium-82, the most convenient positron emission tomography agent for heart imaging. Twenty-six elements only have one stable element, while tin has the most stable isotopes with ten.

The approximately ninety naturally occurring elements are estimated to occur as 339 different isotopes, of which roughly 250 are stable and 35 are unstable (radioactive) with extremely long half-lives of millions of years. More than 3,000 additional radioactive isotopes have been artificially created. In nature, most elements are comprised of a mixture of isotopes.

Visit Brookhaven National Laboratory’s National Nuclear Data Center website for an interactive Chart of Nuclides, which organizes all elements and isotopes according to the number of protons and neutrons in the nucleus, plus provides information on percent natural abundance of stable isotopes, half-lives of radioactive isotopes, major emissions and energies (alpha, beta, positron, gamma), and more. 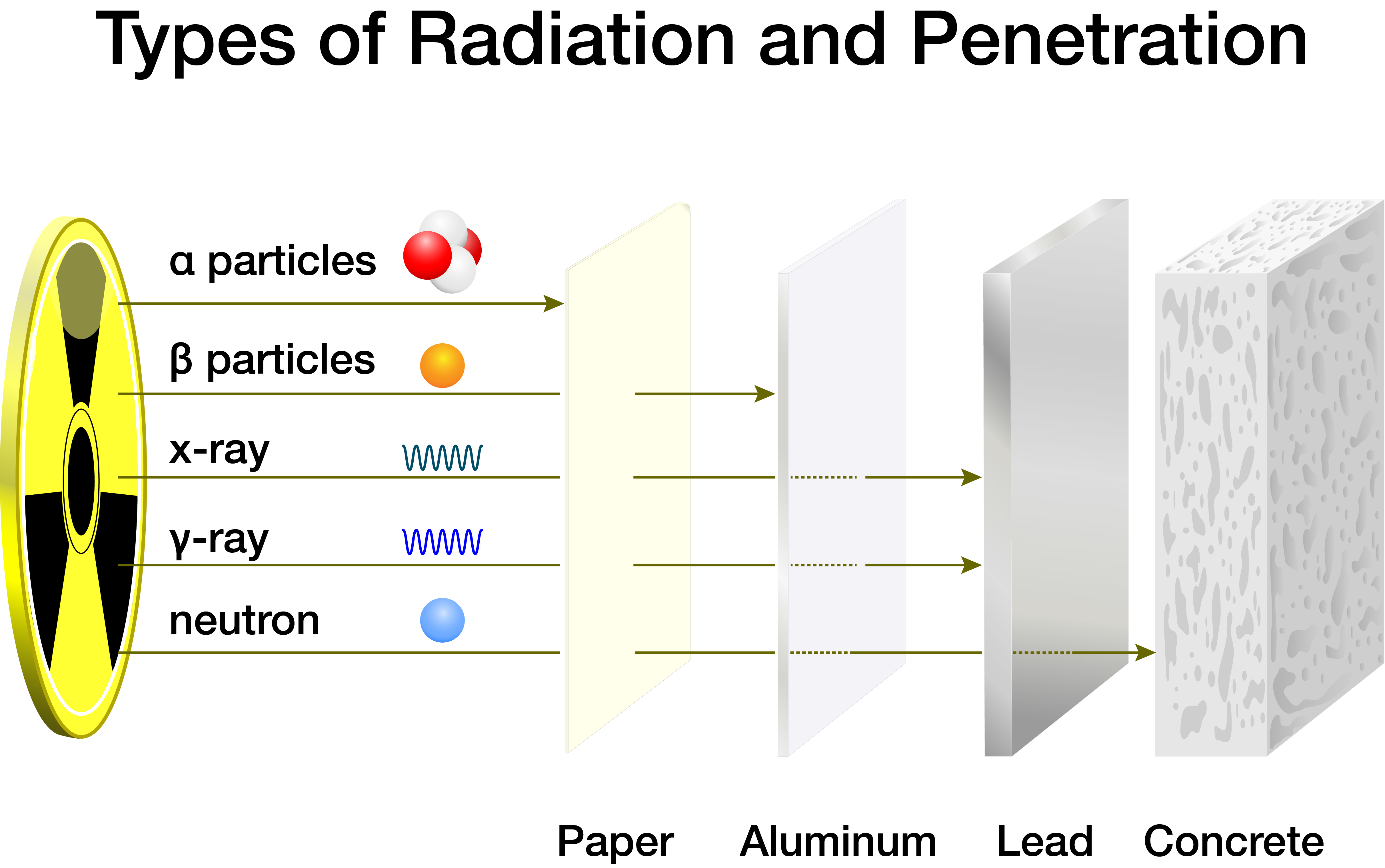 Isotopes can either form spontaneously (naturally) through radioactive decay of a nucleus (i.e., emission of energy in the form of alpha particles, beta particles, neutrons, and photons) or artificially by bombarding a stable nucleus with charged particles via accelerators or neutrons in a nuclear reactor. In some cases, a new isotope of the same element is produced. In other cases, an element is converted to another element in a process called "transmutation."

As radioisotopes naturally decay, particles deposit (i.e., lose) energy onto materials such as air, water, and people as it passes through them. Alpha particles energy is deposited across the shortest distance and, therefore, is "stopped" the most easily. Beta particles require slightly more protection, and photons (gamma rays and X rays) need much greater shielding. Neutron radiation is considered the most severe and dangerous to humans due to its high kinetic energy, so it typically requires the most significant shielding. Materials with low atomic numbers (water, carbon, lithium, etc.) that can slow neutrons down usually offer the most effective shielding.

For more information on isotopes visit the Department of Energy DOE Explains...Isotopes page.