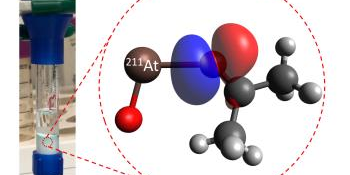 Astatine is an extremely rare element. It occurs naturally only due to the radioactive decay of other elements in the earth’s crust. There are no known stable isotopes of astatine, and none of its isotopes has a half-life greater than 8 hours. This means half of the nuclei in a sample of astatine will decay every eight hours. One isotope of the element, At-211, has shown promise in cancer treatment. However, because of its short half-life, scientists need a rapid system with high yield to recover the At-211 for medical use. In this research, scientists developed a purification system based on a newly discovered chemical interaction of At-211 with a class of chemicals known as ketones. This system results in a high purity, high yield recovery of At-211 in roughly 10 to 20 minutes.